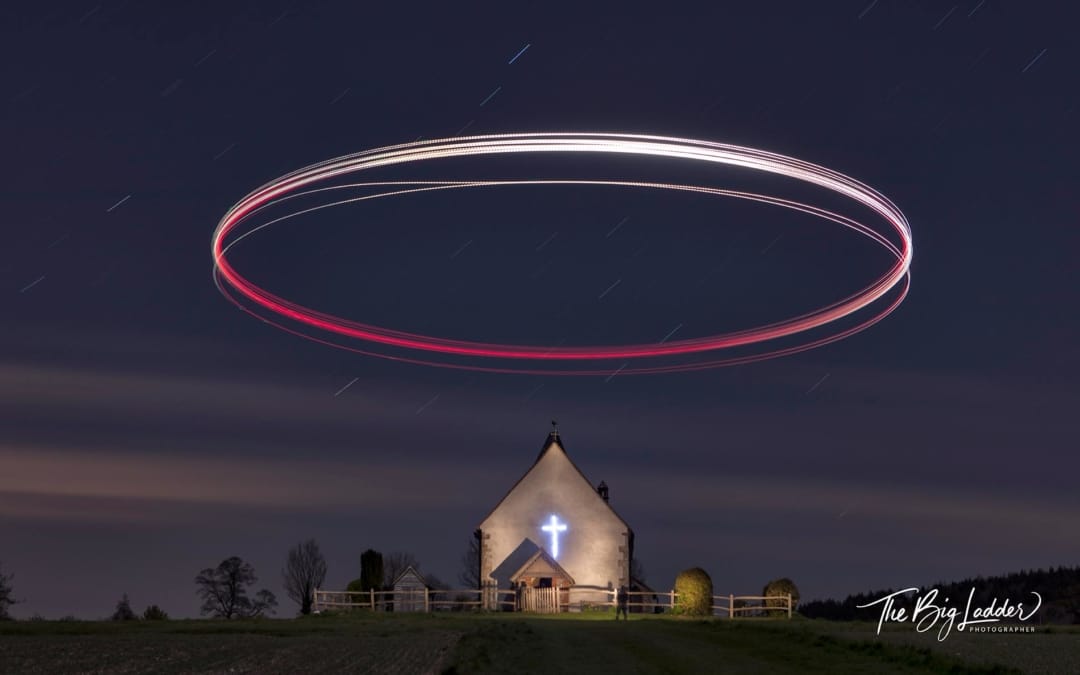 Two ideas came together on this shoot resulting in a picture of what looks like a miraculous halo above St Huberts Church in Idsworth Hampshire.

The first idea was to use the very bright landing light on the drone (Mavic 2 Pro) to paint a long exposure in a picture. But the question as always was – what on earth would I include in the image as a foreground? It had to be something interesting and relevant as I take all my images with the aim of getting them published (this is my job after all).

The idea to shoot the church in the field came as I had visited the area many times but not really felt l had nailed a great picture of it. In order to get an image published in the national press it has to speak for itself as there is no story to go with it, what we call a stand alone image. So therefore I try to make all my drone images as unique and unusual as possible….Then the penny dropped….a halo over the church! I’ve never seen that before!

Night photography is always a bit of a shot in the dark…literally.  I mounted my Canon 5D mark III on a tripod and set about getting the drone to orbit the very dark church. The church however was almost too dark for the idea to work, the focusing on my SLR couldn’t see it and my terrible eyes struggled to do it manually. The drone also couldn’t see it to orbit well, the first attempt rendered a halo off centre, the second I screwed up by allowing the LED on the drone controller to trail light into the image (any bright light will register on the camera)…lesson learnt…try again….eventually once I had learnt from all these little screw ups I knew I was about to get the shot…except I was now running very low on drone batteries….each battery (I have 3) only gives me about 20 minutes of flying time. So an hour in total but with all the false starts and wrong circles I was pushing it to the wire.

Exposure wise it was an educated guess…I knew it was so dark it would need something very long, so with the camera set variously between 100 and 400 iso and f8-11, I began doing exposures of about 4 minutes. This gave me long enough to get into the shot and paint the pitch black church with a torch. (you can see my silhouette to the right of the building) The fact the church has a neon cross on the front of course helps this picture hugely, instantly identifying it as a church. The shot also has the added bonus of star trails which is the result of the earth rotating during the long exposure.

The resulting image was used in the Daily Star (I think the wacky nature of the shot appealed to them) and was picture of the day in The London Evening Standard. The image has also been purchased by private buyers and is still currently available for purchase on here : Star trails

The shoot produced just 3 frames….all are in the galllery below….All are one frame with none of the manipulation that you would usually see with this type image, most nights shots you see these days are composites meaning the foreground is from another frame. As can be seen from the first image (below) the drone became erratic as it was too dark to see the church….but by then it was job done…time to go home.