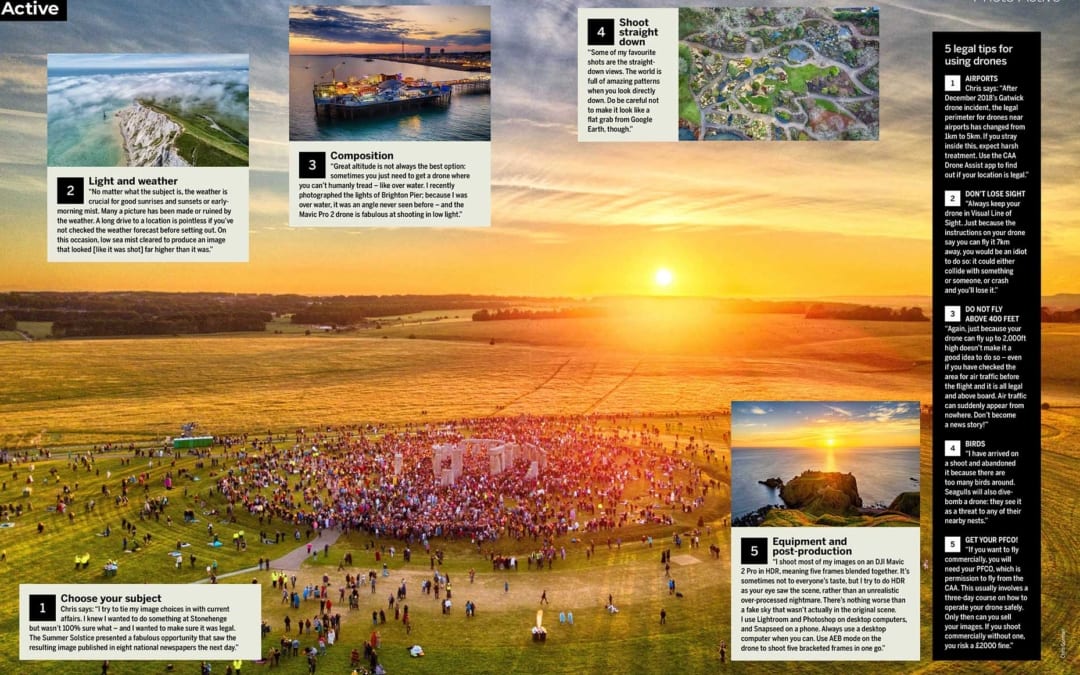 The Big Ladder is featured in this months edition of Digital Camera Magazine. The article written by Chris explains how he identifies subjects to be photographed based on how news worthy they may be. Even a pretty landscape is often shot with a news angle in mind in order to give the image the best chance of publication.

Several images are featured in the piece but Stonehenge and Shipley windmill are both used over 2 pages each. The article goes on to explain how each image was obtained. (if you click into each of the images below the article can be read…tiny writing so you may need those reading glasses).

The stonehenge image for example was an idea I’ve had for some time but was unsure how to execute it. I knew I wanted to photograph Stonehenge but in an interesting way.  Then I realised the summer solstice was approaching and with a bit legal checking air space zones etc I left home at 3.30am and drove an hour to Wiltshire getting to the site just 15 minutes before the sun rose (i like to cut it fine!) and the rest is history…the image was published in 8 newspapers the next day. This is probably the image I am most proud of from the Big Ladder archive. Its not often I feel I’ve nailed a picture first time. I often get people telling me my images are “dodgy” legally, however I do a huge amount of due diligence with contact made  (if necessary) with local air traffic control and local law enforcement. The Stonehenge image was obtained while stood beside the police….who were also flying a drone.

The Shipley image was the result of 3 visits to the mill. It wasn’t until the 3rd visit on an incredibly misty morning that I finally nailed the shot. Setting off before sunrise in thick fog I knew a beautiful day was predicted by the weathermen but in all honesty as I was driving the hour to the mill I did think I was wasting my time as the mist was so thick, even at sunrise I couldn’t see a thing. I decided to wait it out and 40 minutes after sunrise the sun finally burnt the mist off and very gradually the windmill became visible. I will admit that I knew the images I was capturing that day were good, then suddenly a flock of birds came into shot and I pressed the shutter almost in panic as I knew they made the shot. Incredibly in the fickle nature of newspapers it wasn’t used by anyone the next day. It became a massive slow burner. First being short listed for Drone Photographer of the Year at the British Photography Awards, on the back of that the Daily Telegraph published it and on back of that it was was chosen to exhibited in the BPPA Assignments exhibition of the best of the years press photography on Londons South Bank. It has also been purchased by private collectors.

Other points made in the article include not every drone shot is done from great height, the beauty of a drone is that within reason it can go anywhere, probably most importantly over water as many of the Big Ladder images are. I often feel flying over water requires nerves of steel. however they can return images not previously seen before.

Aerial photography is fast becoming the great new alternative to illustrate a story, mainly because we’ve seen everything from the same angle before (the ground) and an aerial shot brings a subject into its own.

The magazine can be found in WH Smith and Sainsbury’s. So go get your copy today. If you would like a PDF of the article then by all means drop me a line.